PEN Armenia was founded in 1991 by the renowned Armenian poet, translator and public figure Gevorg Emin. The founding organization was officially called the Armenian P.E.N. Centre. Despite the turbulence of those years, immediately following the collapse of the Soviet Union and the rise of a fledgling independent state, the organization managed to establish itself thanks to the efforts of Gevorg Emin and his son Artashes Emin, who involved themselves in the work of the international body and began to contact other centers as well. The Armenian Centre worked closely with the Union of Writers of Armenia, and set up their activities in the same space. Several dozen members of the Union were also members of the Armenian Centre, and many of them were the prominent literary figures of their times – Hrant Matevosyan, Hamo Sahyan, Sero Khanzadyan, Vardges Petrosyan, Aghasi Ayvazyan, Vahagn Davtyan, Silva Kaputikyan, Anahit Sahinyan, Maro Margaryan, Edvard Jrbashyan, Ruben Zaryan, Hovhannes Ghukasyan, Alisa Kirakosyan, Stepan Alajajyan, Stepan Topchyan, Hrachya Tamrazyan, and others. In 1998, the organization suspended activities for a brief period following the death of Gevorg Emin, after which it was restructured.

On December 15, 1998, the Armenian P.E.N. Centre adopted new bylaws during an assembly. The translator, literary analyst and publisher Anna Hakobyan was elected the new President. The organization’s Armenian name was modified to reflect the original acronym of P.E.N. [from Փ․Ե․Ն to Պ․Է․Ն] (Armenian Poets, Essayists, Novelists, Center Non-Governmental Organization). The bylaws were also modified to focus greater attention on the values of the Charter and their interpretation. For example, according to President Anna Hakobyan, “A PEN member cannot be a chauvinist or anyone that has accepted the ideology of a political party. They must be above national and political passions. This is why many of our writers that belong to one political party or the other must withdraw from PEN, including Ruben Hovsepyan, Azat Yeghiazaryan, and others. According to the new bylaws, even writers that occupy senior government positions cannot be PEN members.” New members joined the organization, while only a small number of the original members remained.

Silva Kaputikyan made a public statement while leaving the center, saying that there were no imprisoned writers in Armenia and there was no rationale for creating a committee on that issue. According to Anna Hakobyan, “Silva Kaputikyan disqualified herself when she said that she was used to constantly being at the center of attention, in her words, that she constantly needed ‘affection.’”

The early 2000s proved to be a period of success for the organization. The Armenian Centre actively participated in PEN’s annual Congress, presenting reports on the freedom of speech and expression in Armenia, establishing and running the P.E.N. awards, organizing international conferences, events dedicated to the International Day of Poetry, discussions, as well as publishing an almanac.

In 1999, the Armenian P.E.N. Centre established and organized its first award ceremony (on December 10, Human Rights Day), which recognized winners in various nominations – poetry, essays, and novels. The panel of judges invited for each nomination chose the winners through a special, secret process – the contending texts were first anonymized, then assessed, and it was only after this that the panel was informed of the winners’ names.

The certificate said “The Armenian Center of the writers’ organization P.E.N. International bestows this award upon…” Besides a certificate, the prize also included a small monetary sum. The financial expenses for the awards as well as the organizational costs were mostly borne by Anna Hakobyan and her husband, renowned human rights activist Mikayel Danielyan, who made noteworthy contributions that allowed the center to flourish.

“It might seem unlikely, but I often included my personal payment as the prize money. This was not as crazy as it sounds. I’m certain that we will shake ourselves out of this literary slumber sooner or later, the organization will function to its full extent, and those difficulties will be compensated.”

- Excerpt from an interview with Anna Hakobyan

The award program gained a solid reputation very quickly and it became a central event in Armenian literary circles. Although there were big gaps, the award program ran until 2006, when the final ceremony took place.

In 2001, P.E.N. published their first bilingual (Armenian and English) almanac, which included the works of their members as well as award winners, distributed over four sections – poetry, prose, essays, and literary criticism.

The foreword by Anna Hakobyan contained the following words,

“2001 is a year of triple significance for us. First, it marks 80 years since the founding of the brightest literary club of the century – the P.E.N. Club was established in 1921 with John Galsworthy as its President. Second, this is the tenth anniversary of the Armenian P.E.N. Center, one of around 140 national centers included in PEN International. Its founder and first President (1991-1998) was the celebrated Armenian figure Gevorg Emin. And finally, today marks the presentation of the firstborn of the Armenian P.E.N. Center – our first literary almanac.

The objective of this bilingual publication is not to present Armenian literature to the world; we do not feel a need to do this. For several millennia, Armenian history has continued thanks to its approach to civilization and, most importantly, its culture and literature. And those of us enlisted in the Armenian P.E.N. have signed the PEN International Charter, so we are obliged to reject fraud; it is our duty to resist any pressure, to uphold the truth, which, in Camus’ words, ‘…is mysterious, elusive, always to be conquered.’

The almanac was issued by the A&M publishing house, a company that Anna Hakobyan and Mikayel Danielyan had established back in 1993. The design and layout were the work of Mkrtich Matevosyan.

From October 9-13, 2003, the Armenian P.E.N. Centre conducted an international conference jointly with Yerevan State University titled “The Future of Poetry through Translation”.

The first day of the conference was conducted in a YSU auditorium (with Henrik Edoyan as the main moderator). In her opening speech, Anna Hakobyan stated that “We celebrated the tenth anniversary of the founding of the Armenian P.E.N. Centre two years ago. The first President, who was also the founder, was Gevorg Emin, a renowned poet, translator, and public figure. In those years, our contact with PEN International was through letters, while today we have the opportunity to physically meet each other, which is confirmed by the presence of our guests here today.”

On October 11, to mark the feast of the Holy Translators, a visit was organized to the gravesite of Mesrop Mashtots in Oshakan (discussion moderator – Artem Harutyunyan).

On the final day, the event moved to the hall at Hotel Ani (moderator – Levon Yezekyan). The closing ceremony was marked with poetry readings and a concert (performed by Vahan Artzruni).

Simultaneous interpretation at the conference was provided by Artashes Emin.

More than two dozen presentations were made at the conference by invited guests and local speakers. In 2004, A&M publishing produced a collection of the best content from the conference.

In the mid-2010s, discussions began in Armenian literary circles about relaunching the PEN center in the country. These efforts by writers were boosted by the participation of literary agent Arevik Ashkharoyan, who worked in the 1st Literary Agency at the time. At the Frankfurt Book Fair in 2017, Arevik Ashkharoyan and Alexis Krikoryan met PEN International Executive Director Carles Torner, and discussed the topic of reopening the center. In December 2017, the Armenian PEN Centre was registered as PEN Cultural Non-Governmental Organization.

In Yerevan, through the intervention of the 1st Literary Agency, a series of meetings were held between Anna Hakobyan and the initiative group. Eventually, Anna Hakobyan organized a joint meeting at the Union of Writers between the old members and the initiative group, during which the situation was discussed and an agreement was reached (Dec. 12). The previous 20 members were invited to join the new organization.

During the first quarter of 2018, PEN developed a new strategic program, setting its priorities, development areas, and objectives, particularly on the issues of freedom of speech and expression, translation and linguistic policy, intellectual property advocacy and protection, internationalization of Armenian literature and several other topics.

On April 20, 2018, the Goethe Center in Yerevan hosted PEN’s first open event in Armenia, where the members of the Inknagir Literary Club were also invited. The event turned into a celebration of revolutionary fervor, because a massive political protest was taking place just a few hundred meters away from the venue, at Republic Square in the heart of Yerevan. PEN President Armen Ohanyan read the Charter, presented the mission of PEN International and declared it open to membership by those that shared the values of the Charter and were ready to sign it. The Armenian PEN Center grew to a new level of membership (75 members as of May 2018).

The major political changes that took place in Armenia in 2018, the COVID-19 crisis and 44-Day War in 2020 as well as the uncertainty that followed in the country all posed new challenges to the relaunched PEN Center. In May 2020, Violet Grigoryan informed Armen Ohanyan about her decision to leave PEN, which was followed by the departure of several other members. However, in 2021 new members joined the organization (52 members as of May 2021).

In light of the new realities, the Board of the organization reviewed its strategy. Without an office space and the resources to conduct any activities, a small group of dedicated PEN members has nonetheless been trying for 2 years to establish some stability for the organization. Eventually, the Human Rights House Yerevan recognized the importance of the PEN Center and its mission in Armenia, and extended an invitation for the organization to join it. After a probation period, the PEN Center became a full member of the Human Rights House in 2021.

In 2021, the Centenary Year of PEN International, the Armenian center is celebrating 30 years of its founding in the country. We are confident that the center will succeed in this third attempt to establish itself thanks to the joint efforts across generations of its dedicated members and the literary figures that have come together under the values of the Charter. 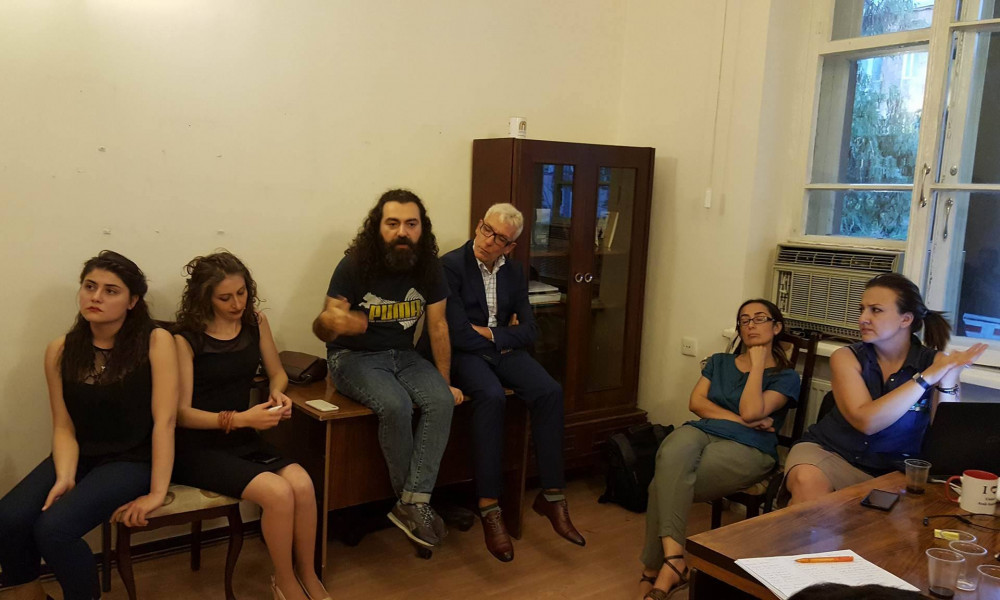 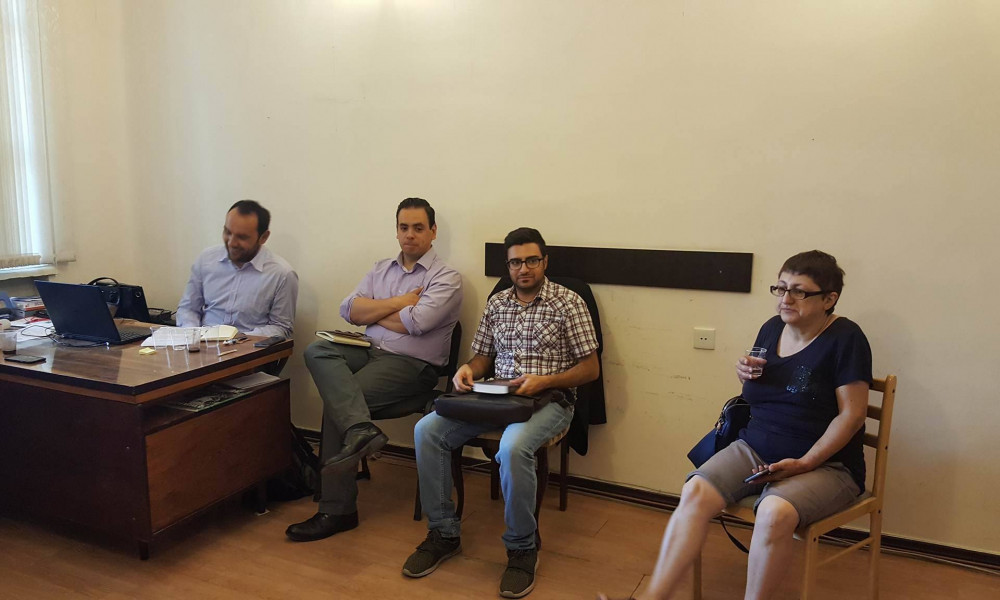 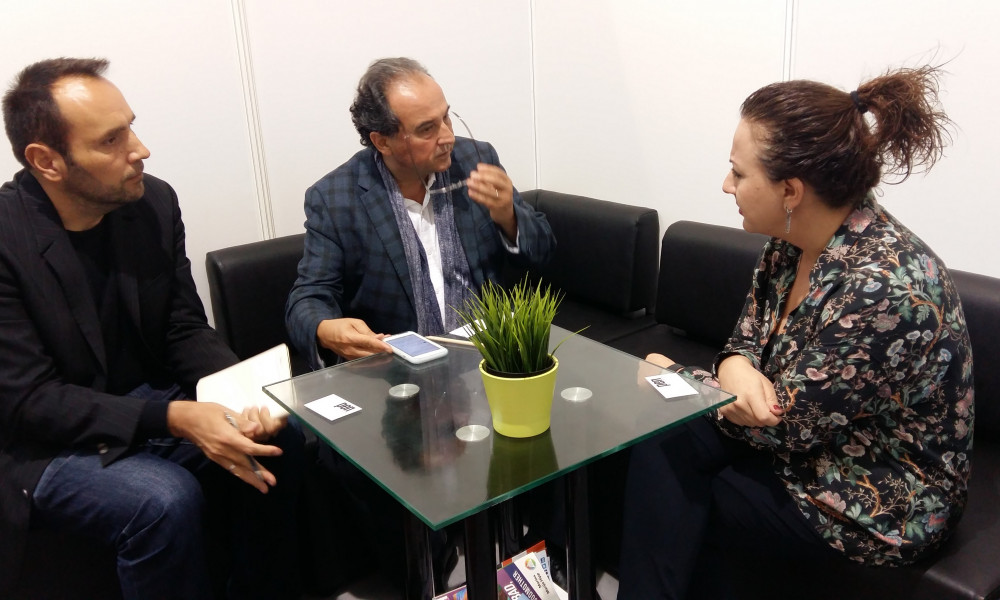 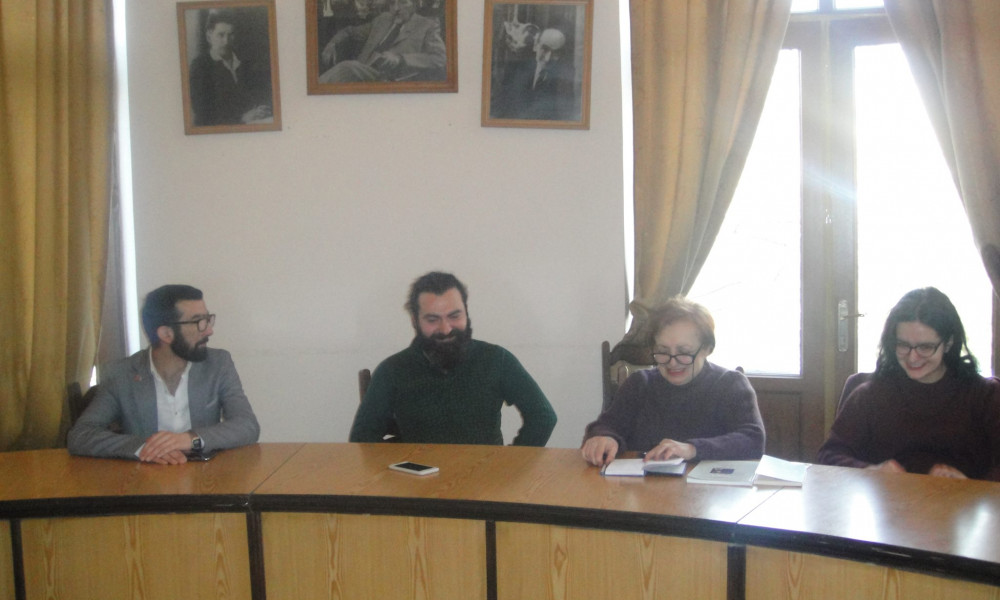 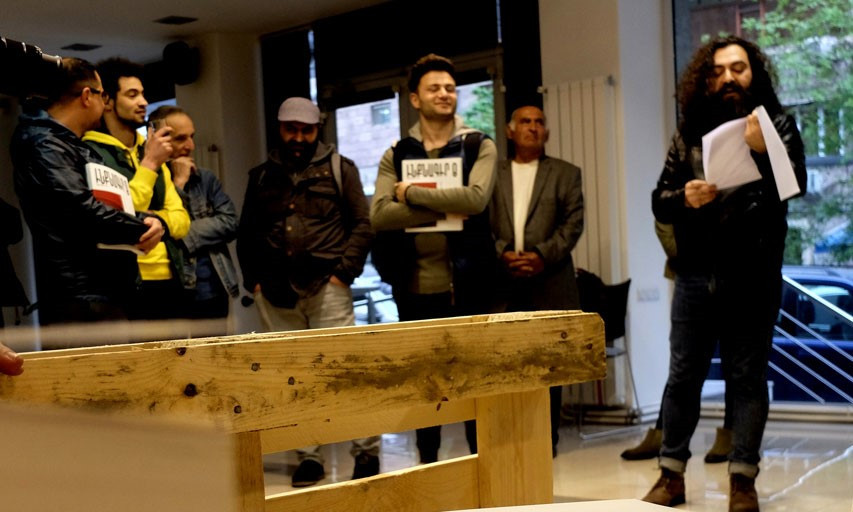 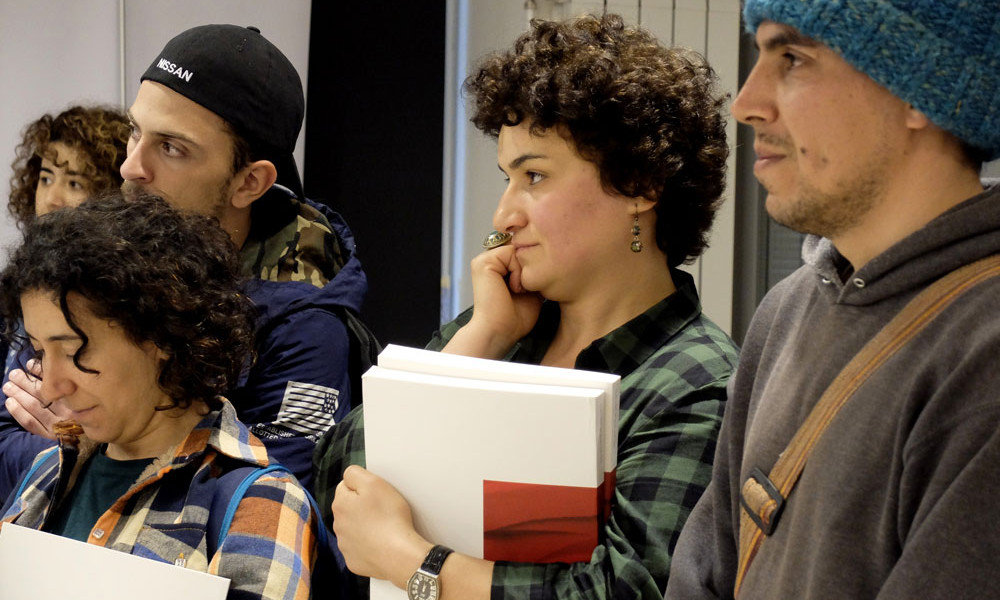 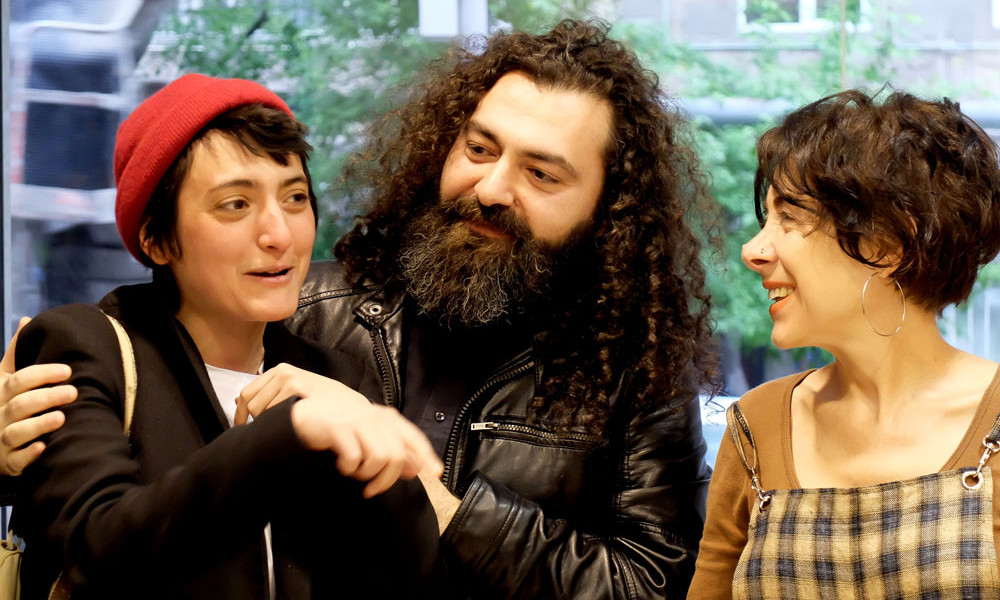