As part of the first phase of PoLitPEN, a series of events was organized through the joint efforts of three sister PEN centers – PEN Armenia, PEN Georgia, and PEN America from June 8 to 12 in Armenia.

Late in the afternoon, PEN Armenia members gathered at Buro to greet their literary colleagues, who had just arrived. Introductions and a word of welcome were followed by speeches and thematic discussions.

As an introduction, Davit Gabunia gave a speech on modern prose and literary trends in Georgia, touching also upon the issues of the literature market. He emphasized the important fact that Georgia was a guest of honor at the 2018 Frankfurt Book Fair, which had led to a positive turning point of sorts for the literary scene in the country.

This was followed by a discussion called Write in Armenia, which was co-organized by our partner ARI Literature Foundation. Arevik Ashkharoyan talked with writer Nana Abuladze on her success story as well as the issue of developing a new generation of literature in the region. We have covered the details of the discussion in a separate article, which you can read here.

The closing discussion of the day was dedicated to the issues of providing new meaning to Armenian-Georgian relations, based on the example of Vahram Martirosyan’s novel Cotton Walls. The discussion with the author was moderated by Gevorg Ter-Gabrielyan, and this was followed by a question-and-answer session as well as a lively discussion. We have described the discussion and the importance of the covered issues in a separate article, which you can read here. 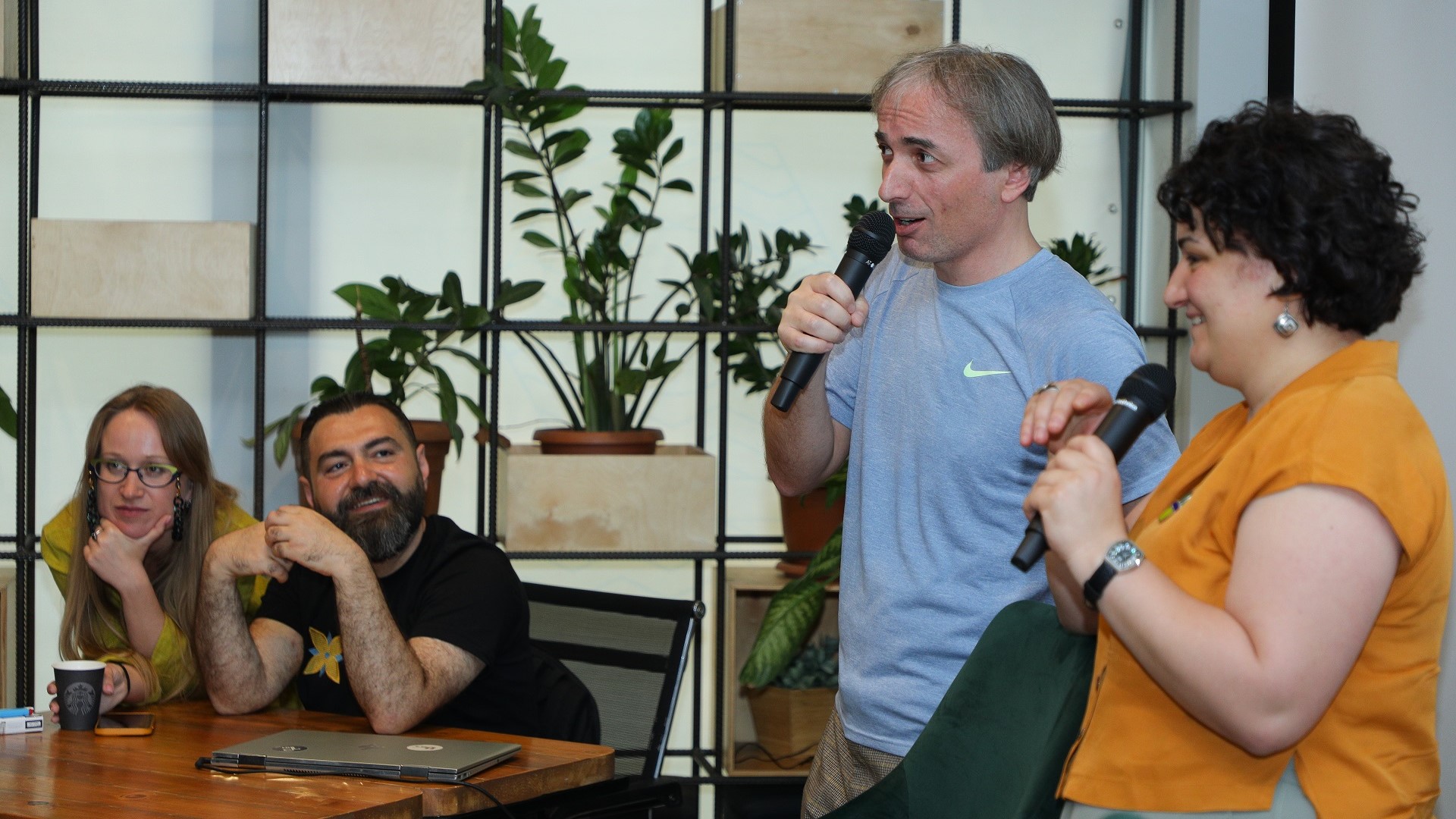 The day began at Boon Club, where participants learned about the activities of our partner, the Boon TV media platform, particularly the extensive work they have done in the popularization of literature and poetry. Boon cofounder Gemafin Gasparyan presented the positive experience of the media platform and explored new areas for regional collaboration in the future.

In the afternoon, the events and meetings of the day were largely conducted at the pride of Yerevan, the Cafesjian Center for the Arts, where a special tour and thematic talk were organized, as well as the rehearsal for the Burning Poet gala evening. The partnership with the Cafesjian Center for the Arts and the events of the day have been presented in detail in a separate article, which you can read here.

In the evening, the CCA Special Events Auditorium hosted the Burning Poet gala evening, which was the pinnacle of the first phase of PoLitPEN and an unprecedented event in its format and scope. The American University of Armenia played an important role in supporting the successful organization of the event. We have covered the gala evening of poetry in detail in a separate article, which you can read here. 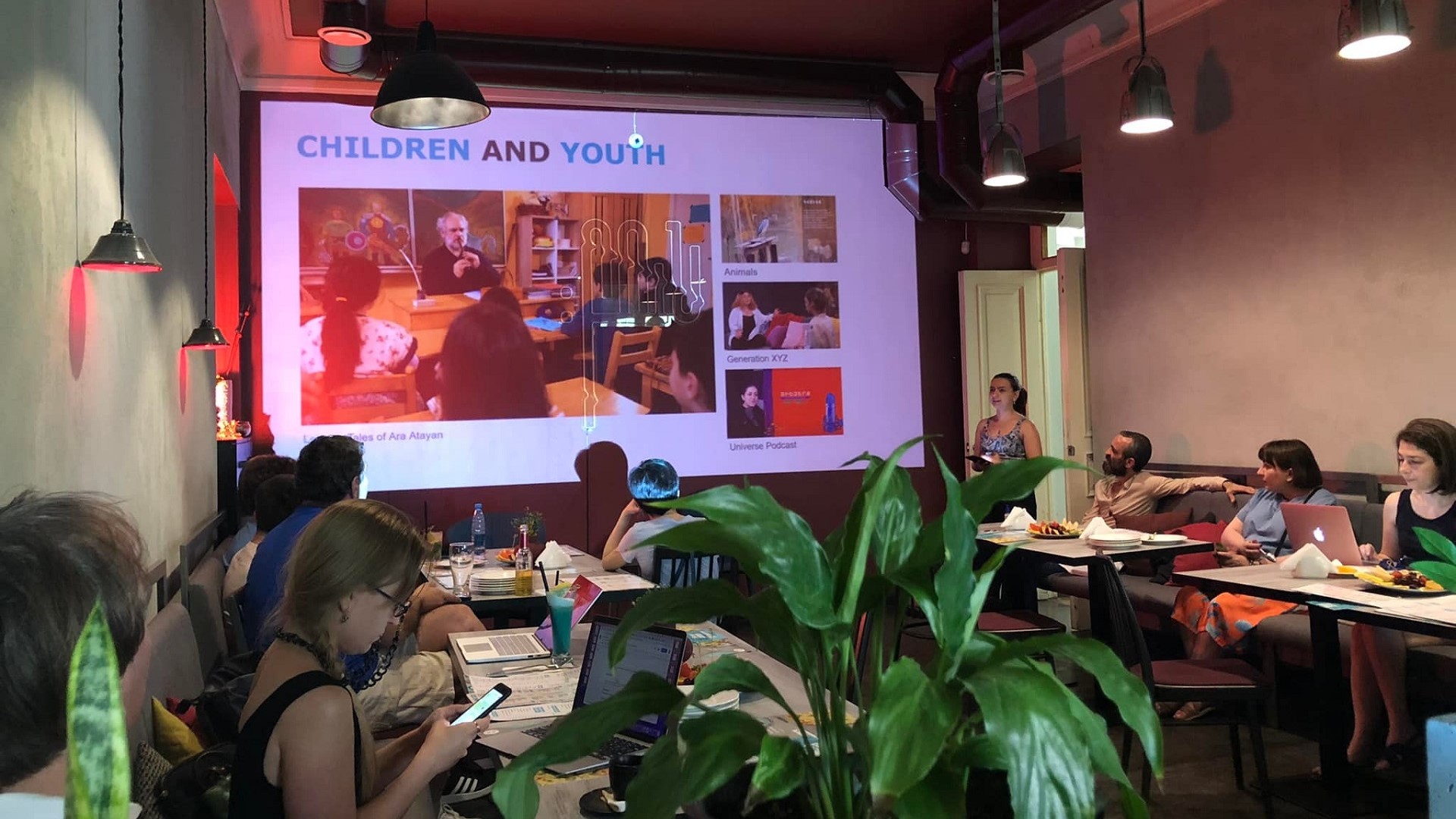 The morning started in one of the pretty corners of Yerevan, Mirzoyan Library, with the initiative titled Polina Sadovskaya’s Fantastic Duqan. The event consisted of two parts – a lecture-discussion followed by a photo session conducted by our partner Photo Atelier Marashlyan. The photographs will be published as part of the upcoming Burning Poet online campaign. We have covered the ideological basis and significance of the discussion conducted as part of Polina Sadovskaya’s Fantastic Duqan in a separate article, which you can read here.

At 3 p.m., a discussion meeting called Writing and Women took place with writer Tamta Melashvili at the Goethe-Zentrum Yerevan, moderated by chairperson of the PEN Armenia Women Writers’ Committee, writer Lusine Kharatyan. We have covered the details and significance of this event in a separate article, which you can read here.

At 6 p.m., a “meet the author” and book signing event took place at Zangak bookstore with author Archil Kikodze, whose novel Southern Elephant was published in Armenia through the translation of PEN Armenia coordinator of Armenian-Georgian relations Asya Darbinyan. The event was moderated by Nazeli Ohanyan, who hosts the cultural program Vernatun on Public Radio.

The events of the day ended at Artbridge bookstore-café with an evening of literature and reception hosted by EU Ambassador to Armenia Andrea Wiktorin, the special guests of which were the winners of the EU Prize for Literature – Aram Pachyan from Armenia and Iva Pezuashvili from Georgia. It was symbolic that, given how June marked the 30th anniversary of diplomatic relations between Armenia and Georgia, it was the European Union Delegation that supported the success of this real festival of literature, headed by Ambassador Wiktorin, where the writers and art lovers from the two countries had the opportunity to celebrate their victories. This once again highlighted the uniting power of the European Union, in contrast to those that sow seeds of hostility and hate between nations in the region. We have covered the details of the event in a separate article, which you can read here. 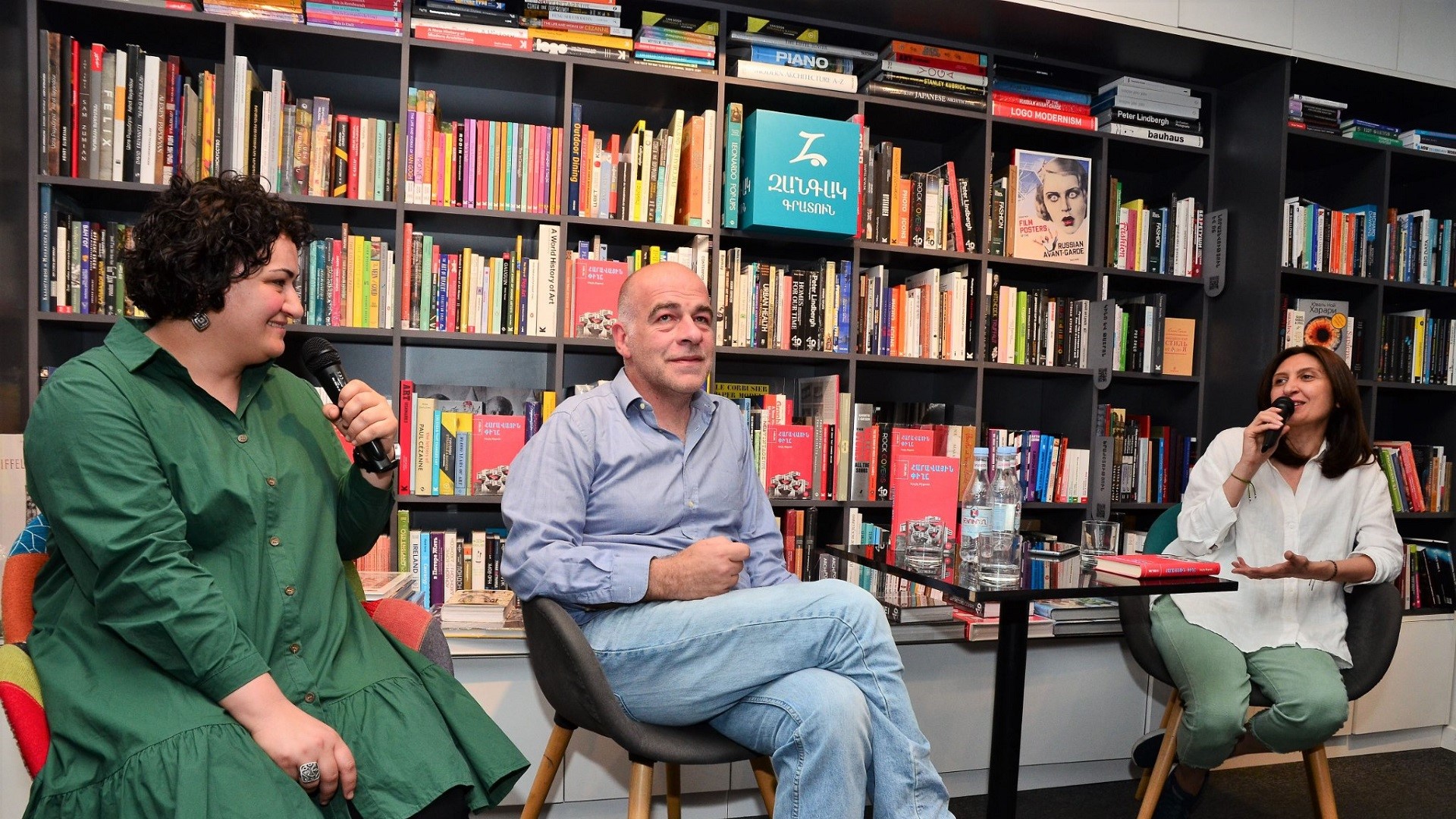 At 11 in the morning, a meeting took place of a small group of delegates with the President of the Republic of Armenia, Vahagn Khachaturyan. According to the official website of the President:

"The President of the Republic of Armenia, Vahagn Khachaturyan, hosted representatives of PEN International’s three member centers today. During the meeting, the current president of PEN Armenia, writer Armen Ohanyan, discussed the significance of the establishment of a culture of mutual agreement, the global popularization of writing and literature as well as the struggle for freedom of speech.

The current and former presidents of PEN Georgia, renowned poets Paata Shamugia and Rati Amaglobeli, fiction writer Tamta Melashvili, and Polina Sadovskaya, PEN America Program Director for Eurasia, particularly emphasized the importance of further developing Armenian-Georgian cultural ties, which have existed for centuries but now required a revitalization that matched the spirit of the times. Asya Darbinyan, coordinator of Armenian-Georgian relations for PEN Armenia, mentioned the similarities between the contemporary literature scene in both neighboring countries as well as the popularization issues faced in both markets".

The meeting lasted around two hours and took place in an atmosphere of impressive sincerity. The guests discussed a broad range of topics with the President, from the history of Armenian-Georgian relations to the political challenges of our times. Writer Tamta Melashvili presented an initiative by the sister PEN centers to provide new appreciation for Diana Ukleba’s memory, and she asked him to support the initiative. Armen Ohanyan presented some details on the issue and outline the group’s common vision on how to turn this studio-museum, with its small number of visitors despite being in the very heart of Yerevan, into a permanent venue for Armenian-Georgian cultural dialogue as well as an attractive location for cultural tourism.

We would like to thank the President of Armenia Vahagn Khachaturyan for his appreciation for our mission and the warm reception. 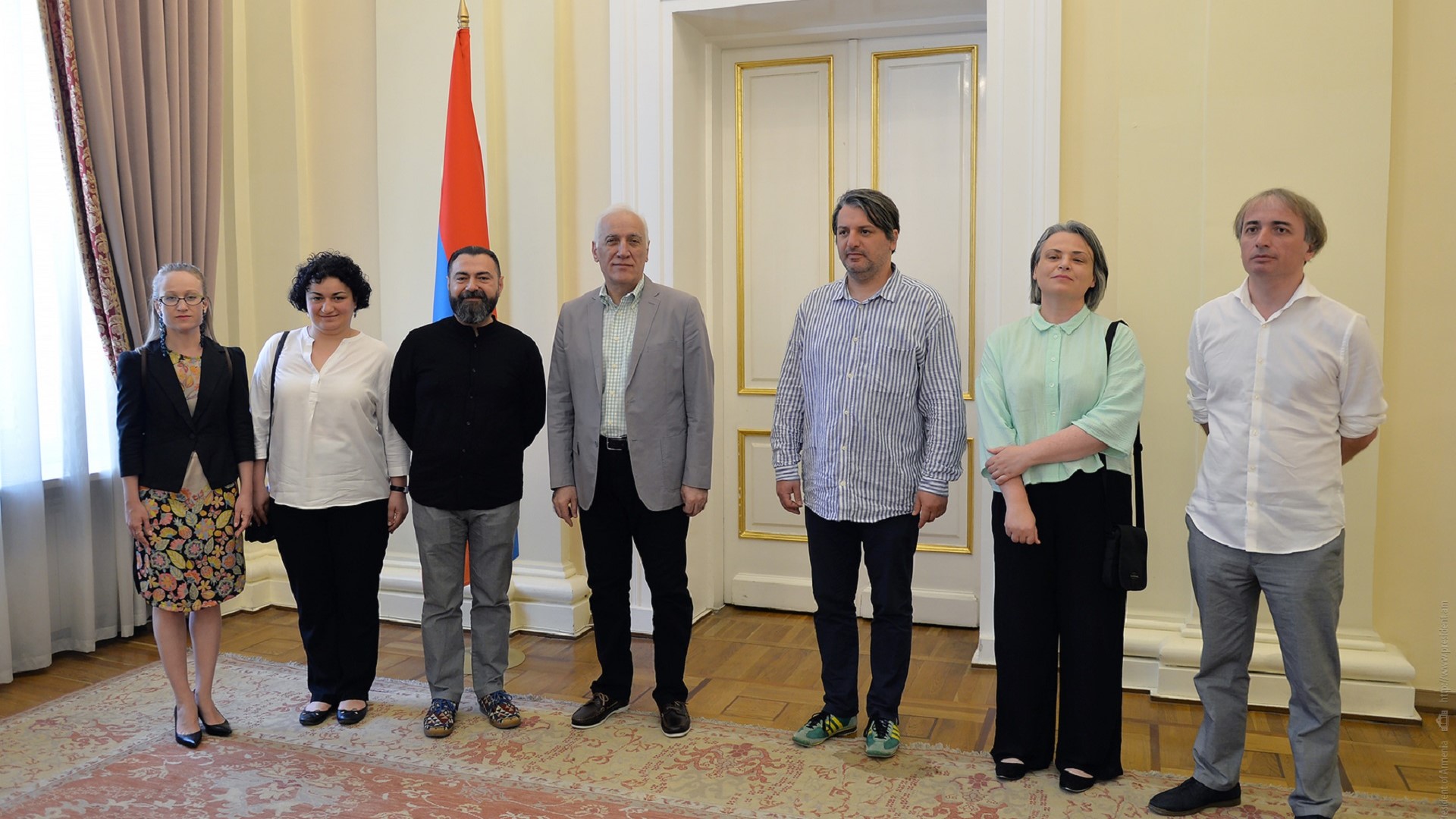 Meanwhile, the other program participants visited the Parajanov Museum. After the visits, Armen Ohanyan and Asya Darbinyan joined the group that was visiting the museum and an exchange of opinions on mutual cultural heritage took part in the enclosed yard.

In the evening, one of Yerevan’s lovely corners, Keerk and Co. hosted a Boell Talk on the topic “Men in Trouble: Major Narratives in Armenian and Georgian Societies through the Lens of Literature” with the participation of Davit Gabunia and Armen Ohanyan, moderated by Eviya Hovhannisyan, Armenia programs coordinator for our partner, the Heinrich Boell Foundation Yerevan Office. We have covered this discussion in a separate article, which you can read here.

At the end of the discussion, Armen Ohanyan placed great importance on the dialogue launched by the first phase of PoLitPEN as a big step to overcoming “Miminoism” and he expressed hope that the dialogue would continue (see here for details). 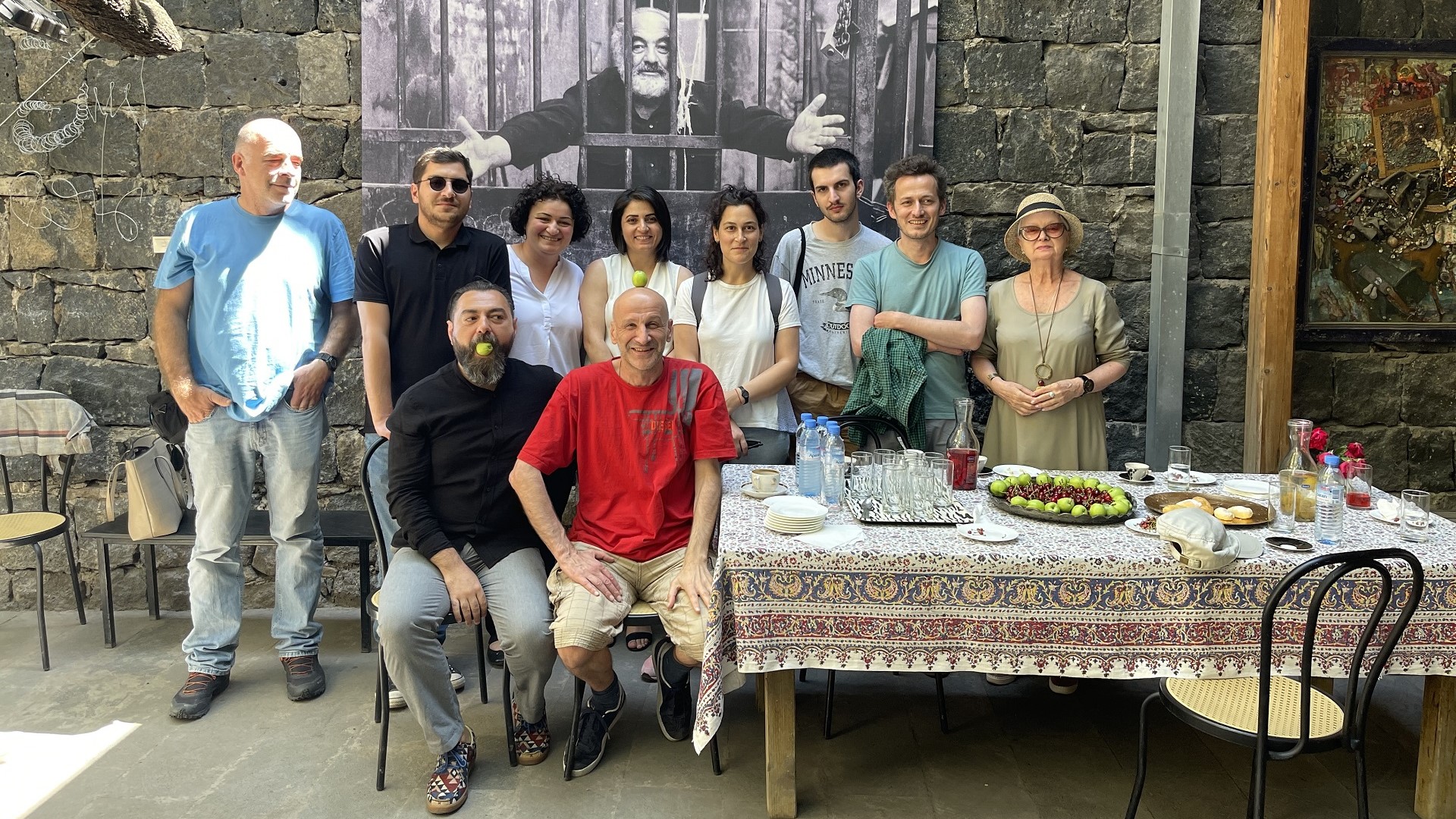 Before leaving for Tbilisi, the guests were accompanied by some PEN Armenia members in their visit to the Sevan peninsula, followed by a stop at the Bashinjaghyan teahouse on the shore of Lake Sevan, where a farewell event took place, during which the outcomes were discussed of the event series in Yerevan and the next steps. 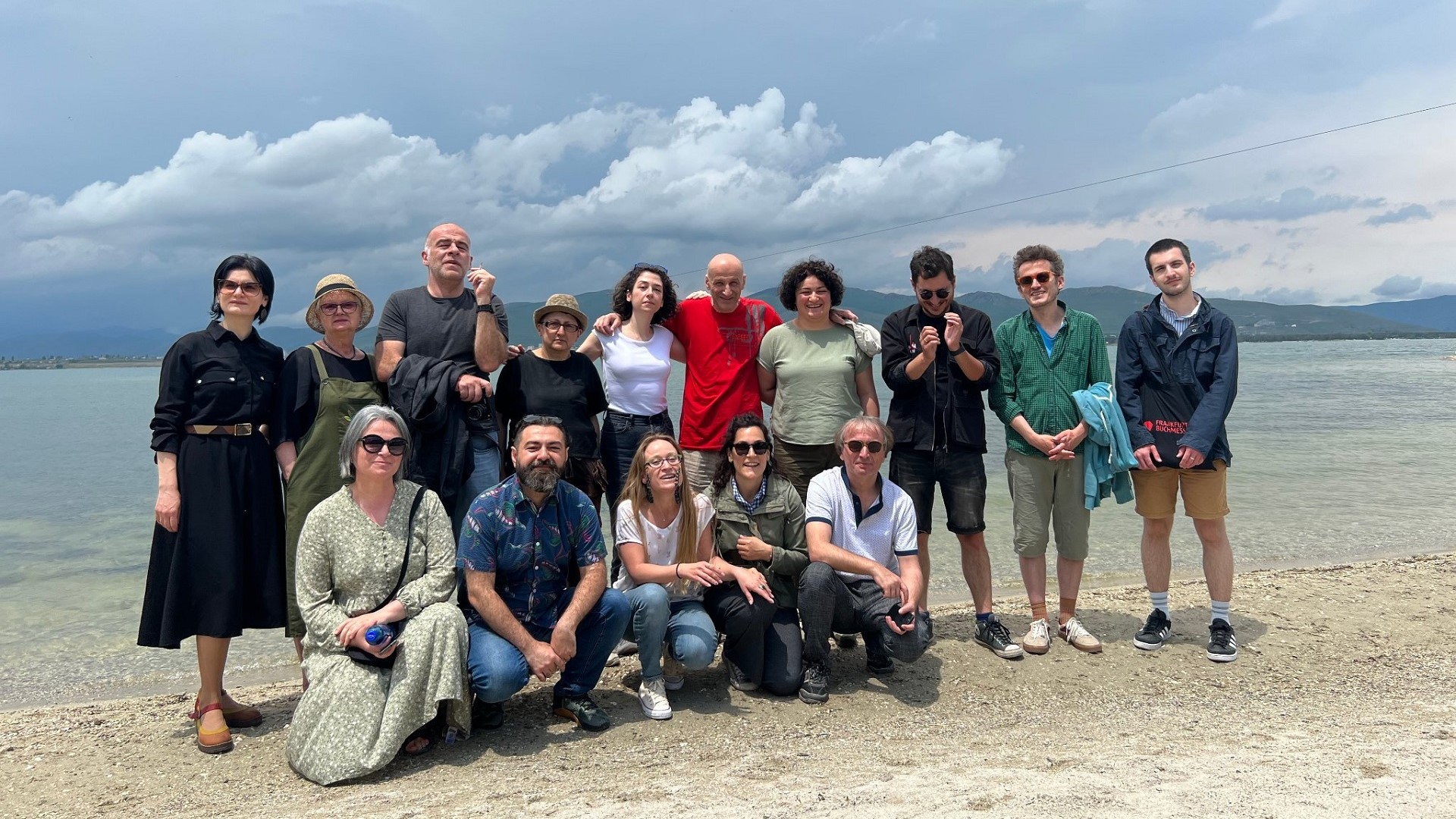 Along with the main events, shooting was undertaken for the videos of the Burning Poet online campaign. Additionally, photographs for the campaign were taken at the Marashlyan studio on June 10.

The Burning Poet online campaign will feature a trilingual video series of selected translated works in Armenian and Georgian, along with English subtitles. The filmmaking team shot the movie in the following order and with the listed poetic duos, each of which was reading the translated work of the literary colleague with whom they were paired.

Paata Shamugia and Karen Antashyan, location – the Cascade complex and Cafesjian Center for the Arts

Shota Iatashvili and Marine Petrosyan, location – the territory of Sevan

The shooting for another pair of Burning Poet participants, Eka Kevanishvili and Arpi Voskanyan, had taken place earlier, at the Yerevan Botanical Gardens on May 15.

The PEN Armenia team members involved in the program are as follows.

Program material translator to English, including this article, Nazareth Seferian

We are grateful to all our partners and team members! 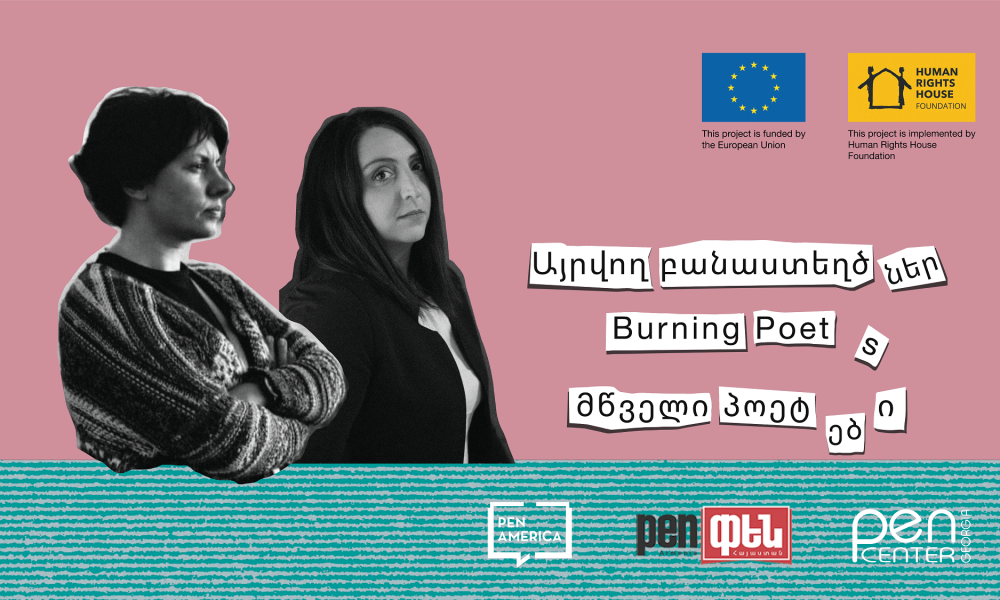 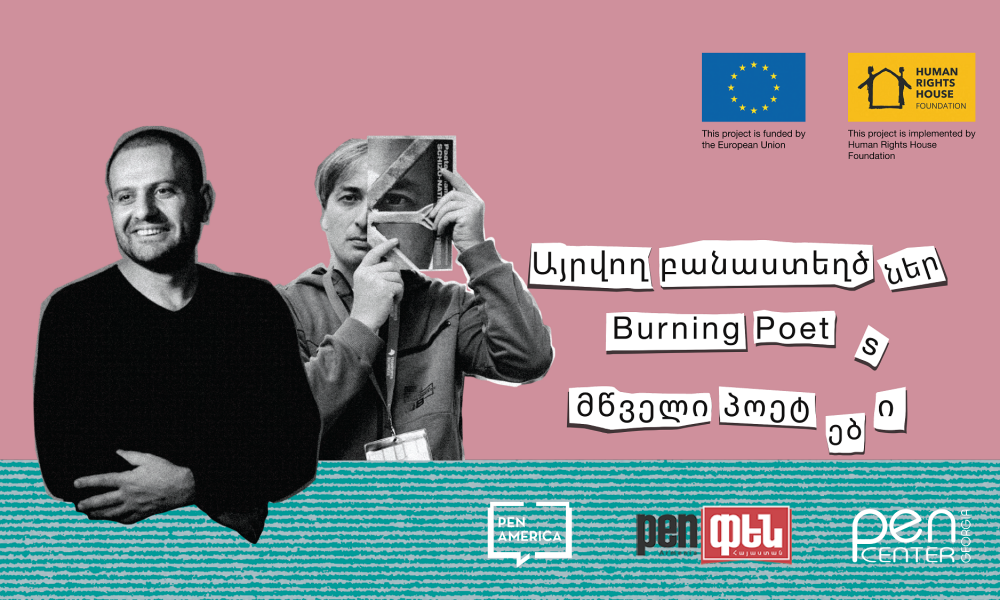 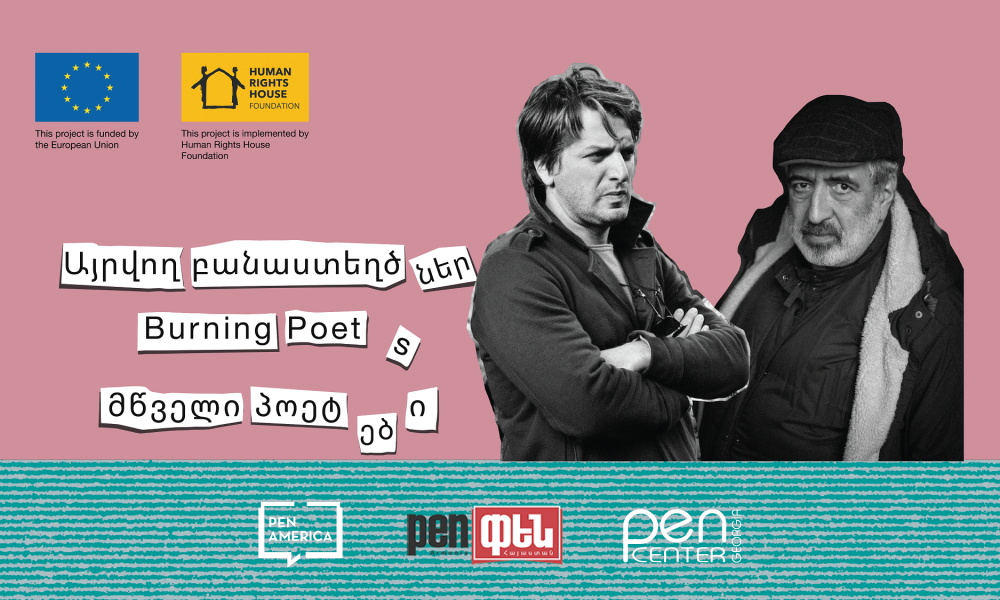 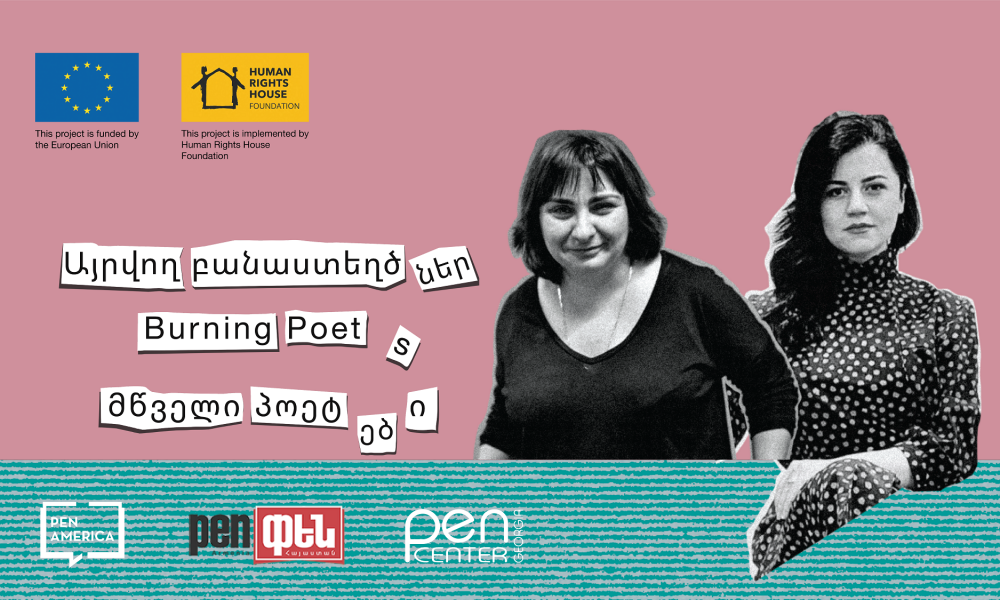 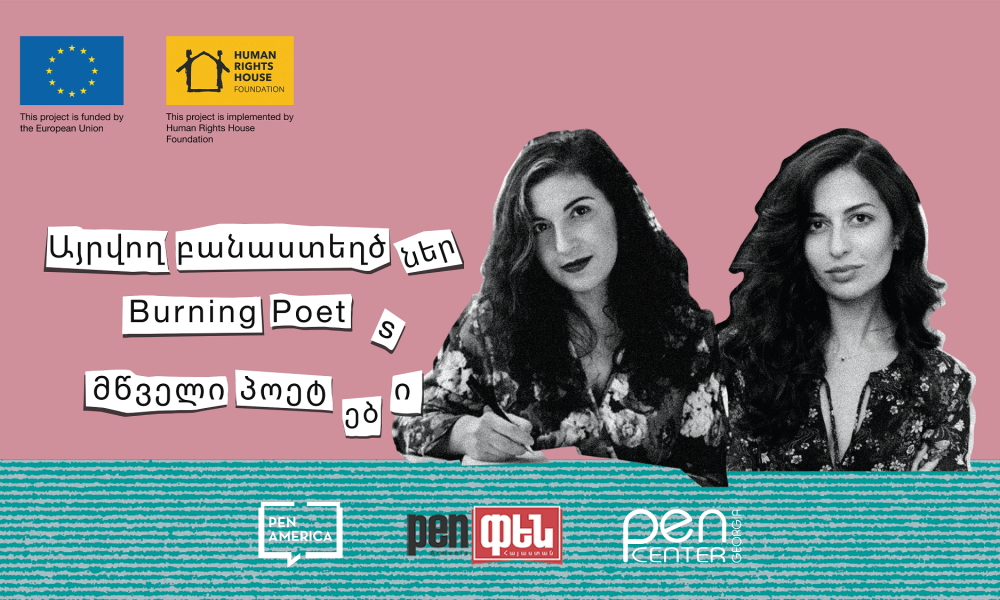 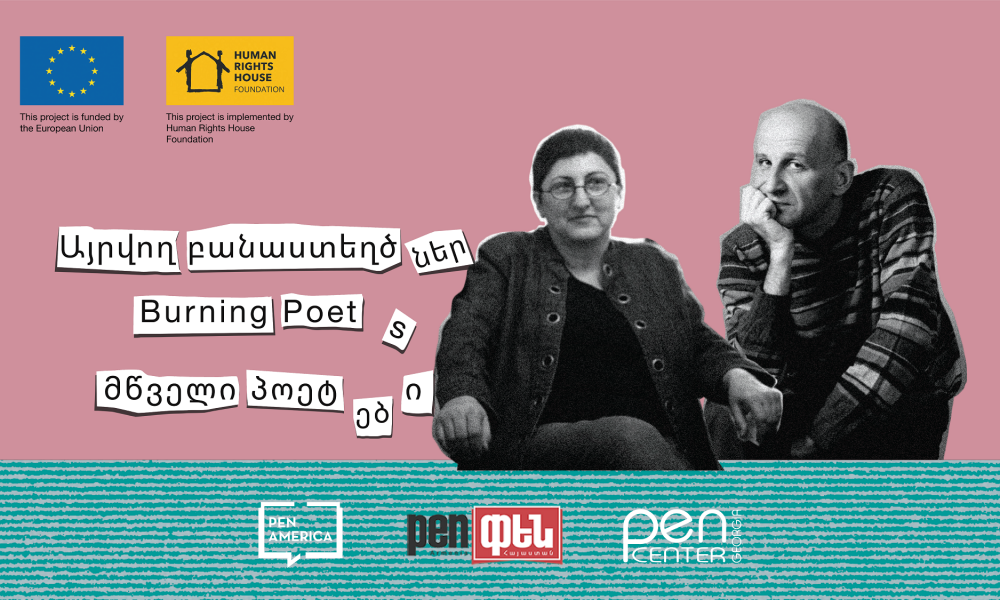 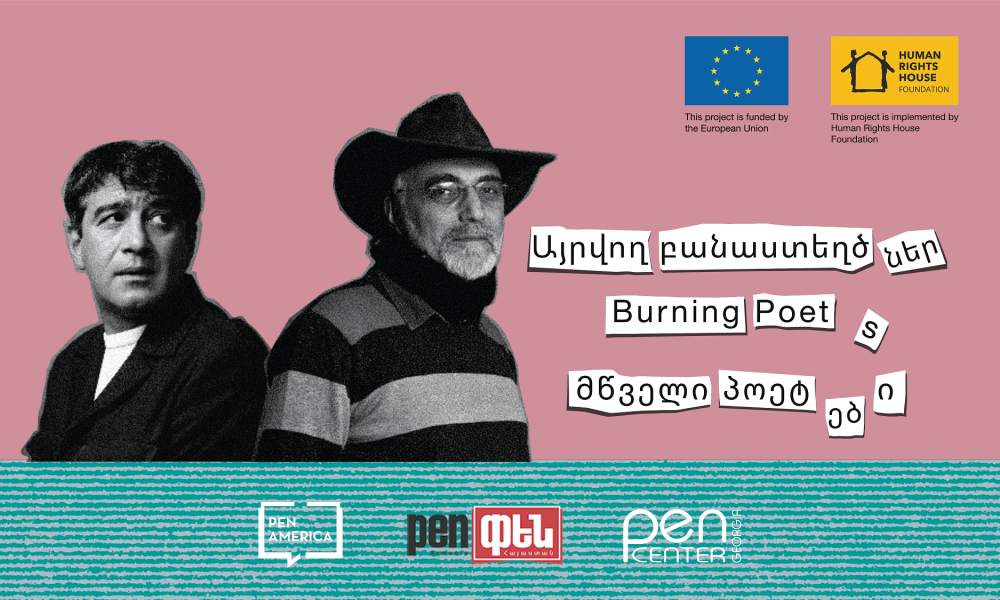 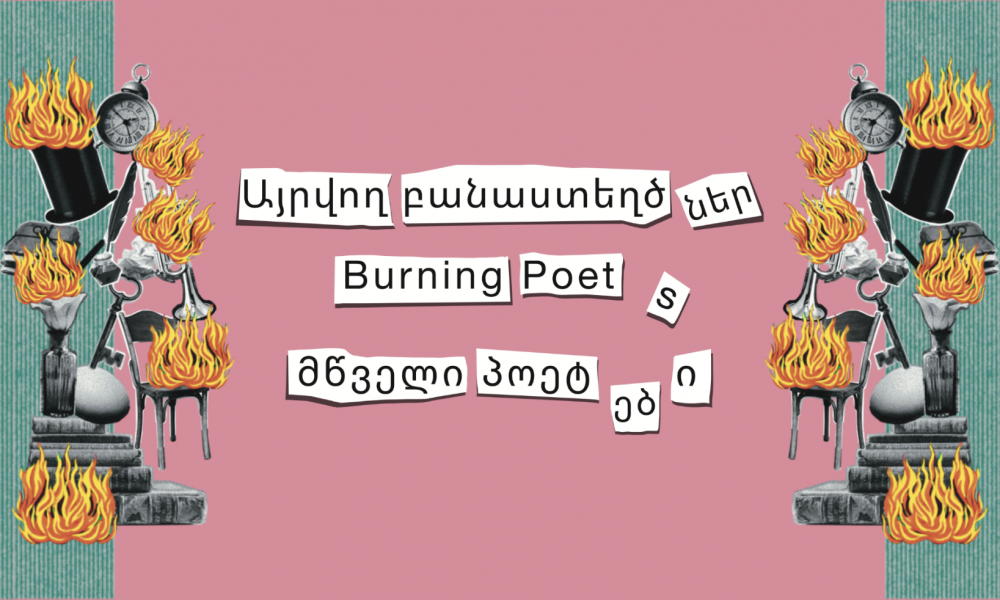 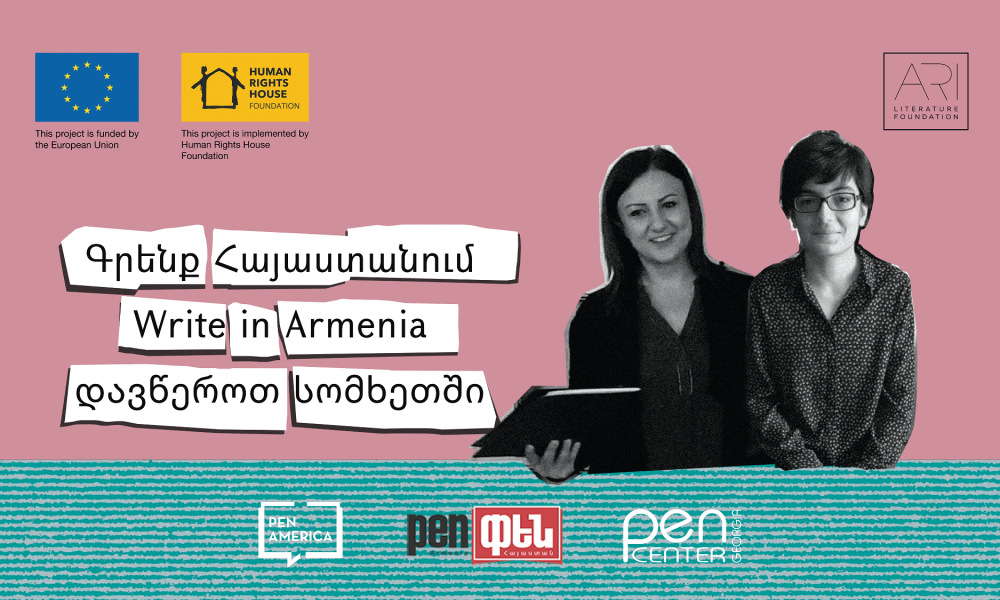 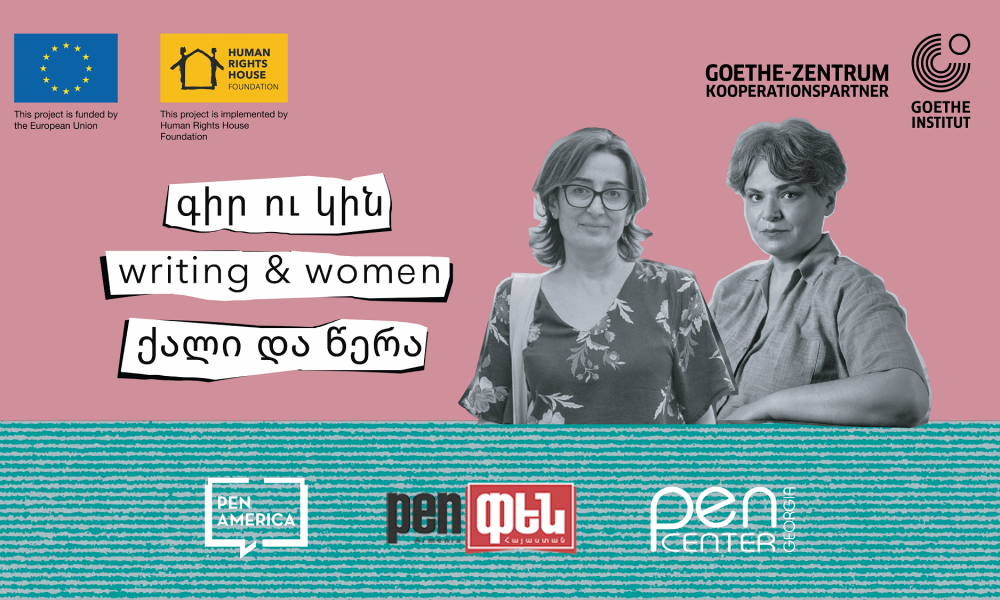 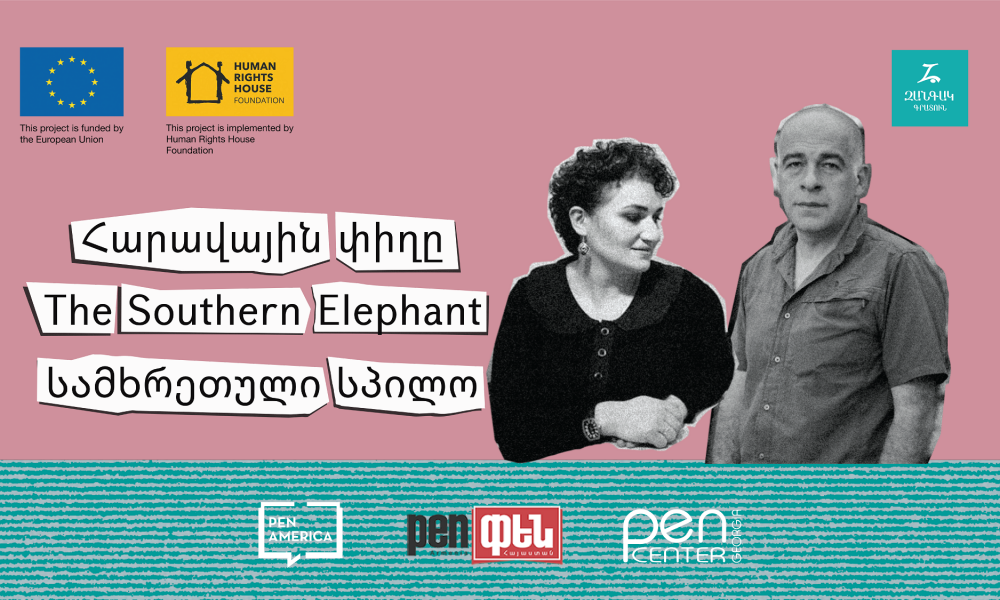 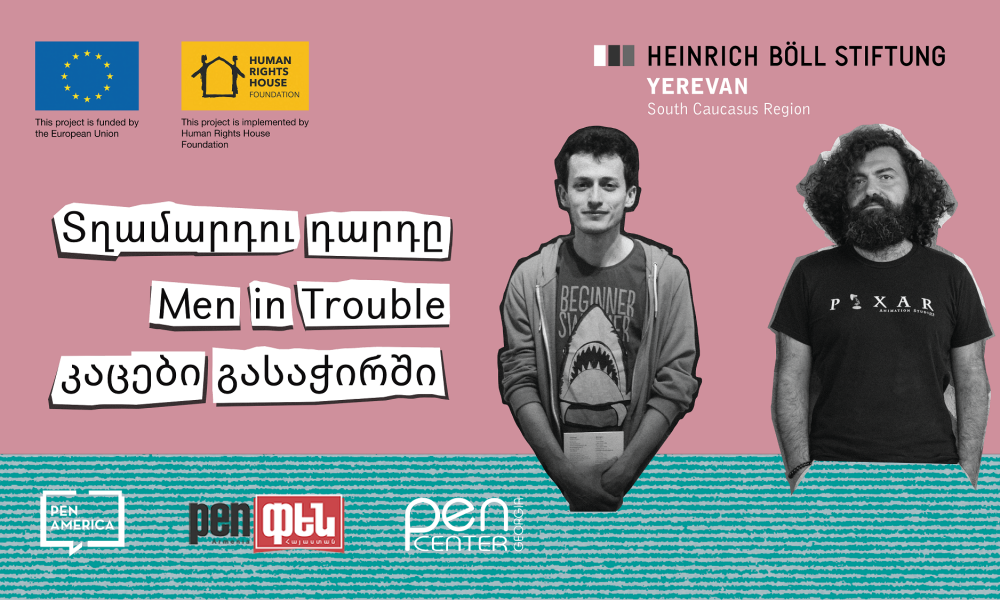